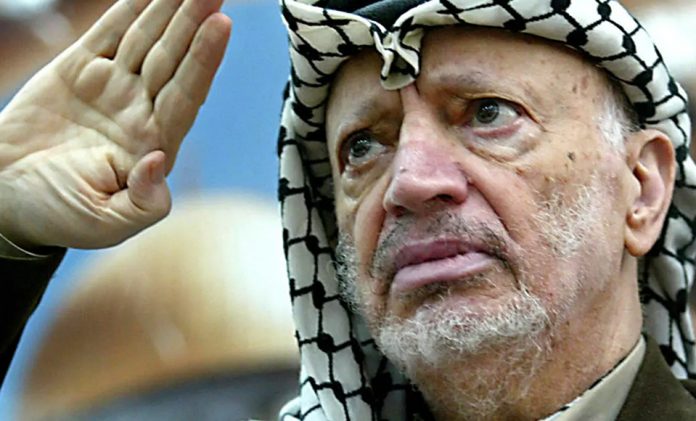 A nine-month investigation suggests that the late Palestinian leader may have been poisoned with polonium.

It was a scene that riveted the world for weeks: The ailing Yasser Arafat, first besieged by Israeli tanks in his Ramallah compound, then shuttled to Paris, where he spent his final days undergoing a barrage of medical tests in a French military hospital.

Eight years after his death, it remains a mystery exactly what killed the longtime Palestinian leader. Tests conducted in Paris found no obvious traces of poison in Arafat’s system. Rumors abound about what might have killed him – cancer, cirrhosis of the liver, even allegations that he was infected with HIV.

A nine-month investigation by Al Jazeera has revealed that none of those rumors were true: Arafat was in good health until he suddenly fell ill on October 12, 2004.

More importantly, tests reveal that Arafat’s final personal belongings – his clothes, his toothbrush, even his iconic kaffiyeh – contained abnormal levels of polonium, a rare, highly radioactive element. Those personal effects, which were analyzed at the Institut de Radiophysique in Lausanne, Switzerland, were variously stained with Arafat’s blood, sweat, saliva and urine. The tests carried out on those samples suggested that there was a high level of polonium inside his body when he died.

“I can confirm to you that we measured an unexplained, elevated amount of unsupported polonium-210 in the belongings of Mr. Arafat that contained stains of biological fluids,” said Dr. Francois Bochud, the director of the institute.

The findings have led Suha Arafat, his widow, to ask the Palestinian Authority to exhume her late husband’s body from its grave in Ramallah. If tests show that Arafat’s bones contain high levels of polonium, it would be more conclusive proof that he was poisoned, doctors say.

“I know the Palestinian Authority has been trying to discover what Yasser died from,” Suha Arafat said in an interview. “And now we are helping them. We have very substantial, very important results.”

The institute studied Arafat’s personal effects, which his widow provided to Al Jazeera, the first time they had been examined by a laboratory. Doctors did not find any traces of common heavy metals or conventional poisons, so they turned their attention to more obscure elements, including polonium.

The study of Arafat’s medical file and belongings was carried out at the University Hospital Centre in Lausanne, Switzerland.

The university’s Centre of Legal Medicine is considered one of the best forensic pathology labs in the world.

It has studied evidence for the United Nations in East Timor and the International Criminal Court in the former Yugoslavia, and it investigated the death of Princess Diana, among other well-known personalities.

It is a highly radioactive element used, among other things, to power spacecraft. Marie Curie discovered it in 1898, and her daughter Irene was among the first people it killed: She died of leukemia several years after an accidental polonium exposure in her laboratory.

At least two people connected with Israel’s nuclear program also reportedly died after exposure to the element, according to the limited literature on the subject.

But polonium’s most famous victim was Alexander Litvinenko, the Russian spy-turned-dissident who died in London in 2006 after a lingering illness. A British inquiry found that he was poisoned with polonium slipped into his tea at a sushi restaurant.

There is little scientific consensus about the symptoms of polonium poisoning, mostly because there are so few recorded cases. Litvinenko suffered severe diarrhea, weight loss, and vomiting, all of which were symptoms Arafat exhibited in the days and weeks after he initially fell ill.

Animal studies have found similar symptoms, which lingered for weeks – depending on the dosage – until the subject died. “The primary radiation target… is the gastrointestinal tract,” said an American study conducted in 1991, “activating the ‘vomiting centre’ in the brainstem.”

Scientists in Lausanne found elevated levels of the element on Arafat’s belongings – in some cases, they were ten times higher than those on control subjects, random samples which were tested for comparison.

The lab’s results were reported in millibecquerels (mBq), a scientific unit used to measure radioactivity.

Polonium is present in the atmosphere, but the natural levels that accumulate on surfaces barely register, and the element disappears quickly. Polonium-210, the isotope found on Arafat’s belongings, has a half-life of 138 days, meaning that half of the substance decays roughly every four-and-a-half months. “Even in case of a poisoning similar to the Litvinenko case, only traces of the order of a few [millibecquerels] were expected to be found in [the] year 2012,” the institute noted in its report to Al Jazeera.

But Arafat’s personal effects, particularly those with bodily fluids on them, registered much higher levels of the element. His toothbrushes had polonium levels of 54mBq; the urine stain on his underwear, 180mBq. (Another man’s pair of underwear, used as a control, measured just 6.7mBq.)

Further tests, conducted over a three-month period from March until June, concluded that most of that polonium – between 60 and 80 per cent, depending on the sample – was “unsupported,” meaning that it did not come from natural sources.

Doctors in Lausanne, and elsewhere, also ruled out a range of other possible causes for Arafat’s death, based on his original medical file, which Ms. Arafat also provided to Al Jazeera. Their examination ruled out many of the other causes of death that have been rumored over the last eight years.

“There was not liver cirrhosis, apparently no traces of cancer, no leukemia,” said Dr. Patrice Mangin, the head of the Institute of Legal Medicine of Lausanne University. “Concerning HIV, AIDS – there was no sign, and the symptomology was not suggesting these things.”

Dr. Tawfik Shaaban, a Tunisian specialist in HIV and one of the doctors who examined Arafat in his Ramallah compound, confirmed that there were no signs of the disease.

Their conclusions, of course, were based on documentation rather than firsthand examination. Doctors in Lausanne had hoped to study the blood and urine samples taken from Arafat while he was at Percy Military Hospital in France. But when she requested access, the hospital told his widow that those samples had been destroyed.

“I was not satisfied with that answer,” Ms. Arafat said. “Usually a very important person, like Yasser, they would keep traces – maybe they don’t want to be involved in it?”

Several of the doctors who treated Arafat said that they were not allowed to discuss his case – even with Ms. Arafat’s permission – because it was considered a “military secret.” And most of his onetime doctors in Cairo and Tunis refused requests for interviews as well.

With those avenues of inquiry closed, Arafat’s body itself would be the last remaining source of conclusive evidence. Exhuming it would require approval from the Palestinian Authority; shipping bone samples outside of the West Bank would require permission from the Israeli government.

Whatever the outcome, Ms. Arafat said she hopes further tests would “remove a lot of doubt” about her husband’s still-mysterious death.

“We got into this very, very painful conclusion, but at least this removes this great burden on me, on my chest,” she said. “At least I’ve done something to explain to the Palestinian people, to the Arab and Muslim generation all over the world, that it was not a natural death, it was a crime.”

A conclusive finding that Arafat was poisoned with polonium would not, of course, explain who killed him. It is a difficult element to produce, though – it requires a nuclear reactor – and the signature of the polonium in Arafat’s bones could provide some insight about its origin.