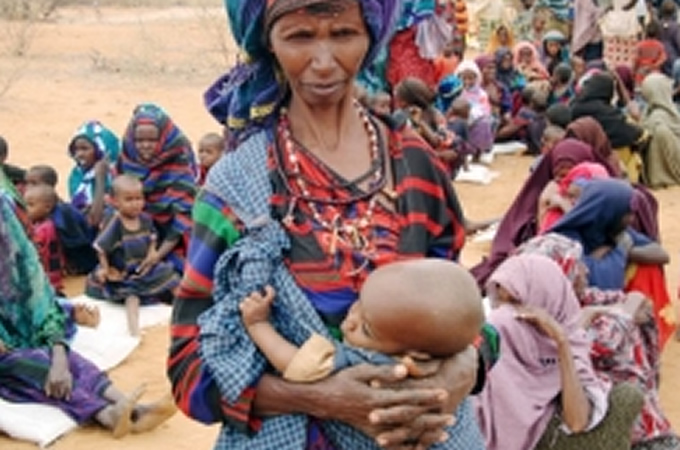 The UN has declared a famine in parts of the Horn of Africa region. Millions of people are facing starvation in what is the worst humanitarian disaster to afflict that part of Africa for 20 years. Aid agencies have made emergency appeals to the public for assistance and to make donations where possible.

Christian Aid, who have workers in the region, are coming across people begging for water. Schools and hospitals are closing due to lack of water and, unlike previous droughts, animals are dying. The charity organisation is currently working hard to get better supplies of water through to the population. They are also trying to give better nutritional food for children and pregnant women. Animals are being fed so as they can be protected from the affects of the drought.

Trocaire say this is the worst drought since the 1950s with parts of Kenya, Somalia and Ethiopia being most acutely affected. They say the disaster is getting more serious by the day. Maurice McQuillan, the organisation’s Humanitarian Programme Manager says: “Malnutrition rates are up to five times higher than the emergency threshold and up to10 million people are facing severe food shortages.”

UNICEF Ireland are also involved in the humanitarian efforts in the Horn of Africa. They cite the increase in the price of fuel and food along with the lack of rain as factors exacerbating the difficulties facing the peoples in the region. They paint a gloomy picture of people having to deal with poverty made worse by physical weakness due to malnutrition. UNICEF are appealing for US$31 million to help bring relief to those in danger of starvation.

Jonathan Edgar from Irish aid agency GOAL explained to The African Voice what measures his organisation are taking to help ease the situation. “We set up an emergency response programme about four weeks ago in Ethiopia. At the moment we are transporting non food items and shelter to the refugee camps at Dadaab, for example, where there has been a huge influx of people from Somalia and we are looking at procuring supplementary food, high energy biscuits, which we aim to send into Somalia itself through partners we have on the ground.”

Edgar says GOAL are concerned that the situation be addressed as speedily as possible: “There is a requirement by the international community to ensure access to those that are most affected, particularly in Somalia. At the moment Somalia is too insecure for agencies to scale up, adding that there is a pressing need for “a safe aid corridor for us to operate more effectively.”

Former President of Ireland Mary Robinson, touring the famine hit areas, told the media: “This is the beginning of a terrible situation for the people here”. She called for a greater response from governments around the world. The “rich countries” must do more to help end the suffering of those affected, she said.

Aid agencies say at least half a million children could die if aid doesn’t arrive soon. A militant group linked to al Qaeda, known as al Shabaab, controls large parts of the worst affected areas and they have, in the past, made it difficult for aid agencies to operate. The UNHCR are currently negotiating with al Shabaab so as to allow aid get through to the millions of people in need.