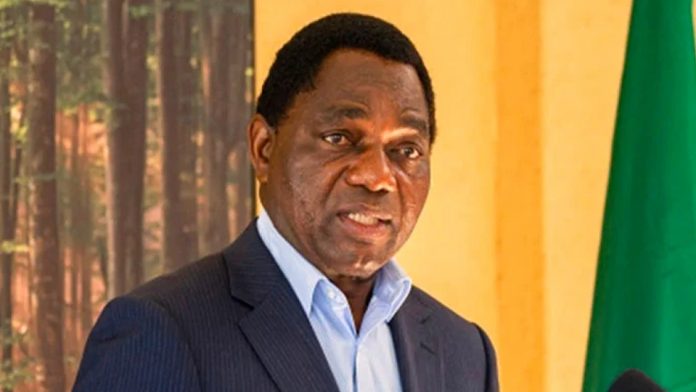 With 155 of 156 constituencies reporting, official results showed Hichilema had captured a landslide of 2,810,757 votes against 1,814,201 for President Edgar Lungu.

“I therefore declare the said Hakainde Hichilema to be president-elect of the Republic of Zambia,” electoral commission chairman Justice Esau Chulu said in a televised address.

The 59-year-old veteran opposition politician beat his long-time rival Lungu following a bruising race held against the backdrop of deteriorating standards of living.

Lungu, who has been in office for six years, had tried to retain his mandate despite growing resentment about rising living costs and crackdowns on dissent.

As president, Hichilema — who has an economics degree and has promised to rebuild investor confidence — will face an economy wracked by high debt, inflation and unemployment. Last year, the copper-rich southern African nation became the first country on the continent to default on its debt in the coronavirus era.

This is the sixth time Hichilema has run for the top job and the third time he has challenged 64-year-old incumbent Lungu, who just narrowly won their last contest in 2016.

Shortly after results were declared, Hichilema tweeted a picture of himself standing in front of a crowd with the caption “Thank you Zambia”.

Thousands of Hichilema supporters flocked onto the streets of Lusaka, erupting into song and dance.

They cheered, whistled and waved party flags, marching towards the international conference centre where the results were announced.

“I am so excited, finally he has done it! Tonight we are celebrating Bally’s victory,” said 21-year-old Rosemary Malunga, referring to Hichilema by his nickname, which means father in local slang.

Hundreds took their victory lap to the entrance of the presidential residence, where soldiers and police kept guard.

Hichilema enjoyed the backing of 10 opposition parties, which threw their weight behind his United Party for National Development (UPND).

But Lungu, who came to power in 2015 snap elections to finish the term a president who died in office, has claimed Thursday’s vote was neither free nor fair.

In a statement issued through the president’s office, he alleged that his party’s polling agents were attacked and chased from voting stations.

Parties that backed Hichilema on Sunday scoffed at the “unsubstantiated” allegations, and urged Lungu to concede.

Known by his initials “HH”, Hichilema on Sunday called for peace.

“We voted for change for a better Zambia that’s free from violence and discrimination,” he said.

“Let us be the change we voted for and embrace the spirit of Ubuntu (humanity) to love and live together harmoniously.”

Zambia has earned a reputation as one of Africa’s most stable democracies where every transition of power has been peaceful since the former British colony adopted its multi-party system in 1990.

International election observers have commended the transparent and peaceful organisation of the polls, which saw a high turnout of around 70.9 percent.

But they also criticised restrictions on freedom of assembly and movement during campaigning.

Social media access, restricted in the capital Lusaka just as Hichilema cast his vote, was restored on Saturday following a court order.