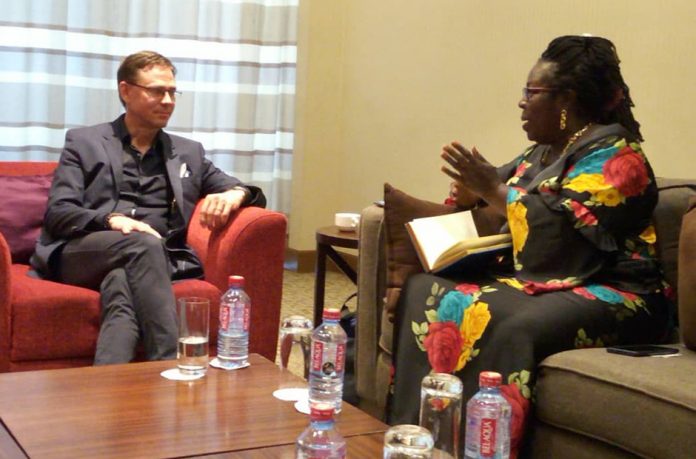 The Vice President for Jobs, Growth, Investment and Competitiveness, of the European Union Commission, Mr Jyrki Katainen has expressed concern about the indiscriminate manner in which people dispose off plastic waste.

He regretted that our beaches have been horribly polluted because people have been irresponsible in the way they use and handle plastics and observed that the problem was faced in many places.

Mr Katainen said the only way in which we can ensure efficient plastic waste disposal and prevent the pollution of our beaches was an attitudinal change.

The Vice President who was speaking to the Daily Graphic in an exclusive interview in Accra recently was worried about the manner in which those who lived close to the beaches particularly behaved, regarding the disposal of plastic and expressed concern that the people expected more to be done by decision makers.

Mr Katainen was happy to note that the EU had expertise in waste management and said this was one area that the EU and Ghana could cooperate.

He said recycling of plastic waste must be easy enough so that people could recycle different waste streams, including plastic as part of their daily lives.

“We need well-functioning systems,” he stated, adding that “the positive thing is that there many technological solutions and will.”

He assured that funding was not supposed to be a problem because recycling generates profit, though setting up the system will involve some costs and the private sector will expect to make some profits afterwards.

Mr Katainen was happy to note that he held fruitful discussions with some people regarding plastic waste challenges in the country.

He said the EU could also assist if Ghana was undertaking an investment project and required private sector input.

The Vice President said the EU could provide the support that will make the country private sector friendly and attractive.

He recalled what was being done in Europe and said they identified 10 most found plastic items on their beaches and banned the use of some of them.

For instance, he said, plastic cutleries which were usually single usage items were being discouraged.

Wooden cutleries could be used for such purposes he noted and said they also have other restrictions on how to collect plastic waste.

He said the EU was also taking steps to address the plastic waste disposal problems and was coming out with policies, adding that the EU has been deciding on legislative changes on how to reduce plastic waste which once implemented will help to reduce significantly the amount of plastic waste and human waste in general.

Mr Katainen observed that in Europe, 95 per cent of the economic value of plastic waste was wasted, by either being incinerated or ending up in landfills and noted that they had made some changes in their legislation.

Mr Katainen spoke on other issues and said there was currently a paradigm shift and they were focusing more on investment and job creation and they had revised their tools to be suitable for mobilising private investment,

The EU Commission Vice President was however happy that the private sector had demonstrated that it could do more in many African countries.

He mentioned investment fund, guarantees for financial institutions like the banks to improve on financing and also touched on blending mechanism where they blend financing with loans and guarantees.