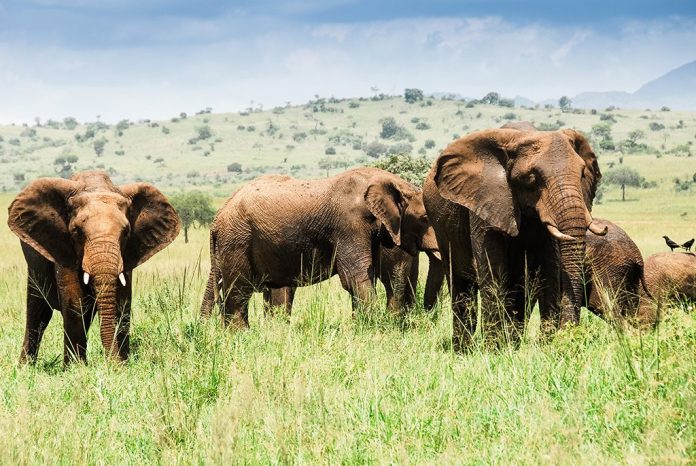 High in the rocky cliffs looking over the Narum Valley of Kidepo Valley National Park sits the shell of a half-constructed and abandoned hotel. Taking a walk around the hotel, one gets an idea that the hotel must have been the brain-child of a man with serious ambition. Imagine, in the most remote corner of Uganda: a giant hotel with an expansive lobby, a huge staff, a restaurant offering fine dining, and one hundred rooms, each with a private balcony on which guests might gaze upon the absolute emptiness of the Kidepo wilderness, nothing to attract the eye but scampering game and mountains the colour of chocolate. The man who came up with this vision: Idi Amin.

With the fall of Idi Amin’s regime, the construction of the hotel was abandoned, despite the fact it was almost complete. Locals claim the army looted the hotel upon Amin’s fall, while UWA (Uganda Wildlife Authority) rangers told me that it was local villagers, urged on by Obote, who ransacked the almost-finished building. Whatever the case, the hotel now stands as a monument to hubris; the concrete walls crumbling, the wood balcony supports rotting, porcelain toilets shattered, and animal droppings all over the floors. At some point, the army seems to have conducted classes in the abandoned rooms. The white walls are covered in charcoal writing of a curious nature. Arcane questions of procedure and law are graphed from one room to the next. One gets the impression of a law professor who, instead of using a blackboard, just moved over one roomwhenever he filled the walls with his lecture notes. The sense of abandoned and grandiose projects in the middle of total wilderness gives the place an eerie atmosphere —the domain of ghosts whose work had not been finished in life.

When you ask locals about the hotel, they mostly shake their heads.

“It’s crazy to think,” one UWA ranger told me, “that anyone thought Kidepo could have enough visitors to fill one hundred rooms. Probably, Amin just wanted a vacation lodge big enough for all his friends.” In fact, even thirty years later, Kidepo can hardly support a hotel with one hundred rooms. Over the last five years, Kidepo has attracted only between 2000-3000 visitors a year.

During the war years, that number was even lower. Murchison Falls National Park, by contrast, boasts 18,000 visitors a year. What is it about the Kidepo experience that keeps the average tourist away?

Tucked away in the northeast corner of the country, along the Kenyan and Sudanese borders, Kidepo boasts the highest game-density of all Uganda’s parks. When it comes to awe-inspiring beauty, the landscape of the Kidepo Valley rivals Kenya’s famed Masai Mara. Although, in terms of acreage, Kidepo Valley is smaller than the national parks of Murchison and

Queen Elizabeth, the landscape makes it feel much larger. The entire park stretches over a lush valley; standing almost anywhere in the park offers the same expansive vista: yellow grass dotted with green acacias, surrounded on all sides by craggy mountains. Herds of ear-flapping elephants seem to be everywhere and every visitor I met while at Kidepo had seen a lion.

As in much of Northern Uganda, the low numbers of tourists may have less to do with the quality of the park and much more with the long-standing underdevelopment of the region. As of right now, tourists have two options when it comes to visiting Kidepo: they can fly or drive. At the price of 550 USD per person to fly to Kidepo, driving is the much more affordable option. But, in my own unique experience, the drive from Kampala took thirteen hours and involved the accidental killing of one chicken, twice getting lost because NRM campaign posters covered the signposts, one inadvertent detour through Kaabong, and a strange situation where we witnessed one soldier punch another one in the face. In other words, my drive to Kidepo was not the kind of thing a typical tourist on vacation wants to experience. It certainly was not the kind of thing that packs tourists into hotels by the hundreds.

The difference in price between flying and driving is also reflected in the accommodation available in Kidepo. Tourists have two choices: the Apoka Lodge, a luxury hotel that can cost up to 400 USD per night, and charming but rustic bandas run by the Uganda Wildlife Authority, which can cost between eight and 15 dollars. A bonus to staying at the UWA bandas: you will almost certainly see an elephant. Bulbul, an alcoholic elephant, has been hanging around the bandas for twenty years, raiding the houses for lemons and local brew.

As for food—the Apoka Lodge has a reputation for top-notch food, but because the lodge flies in all food from Kampala, they can only serve food to guests with reservations. The UWA kitchen served Irish potatoes. Just Irish potatoes (but to be fair to the chef, they were some of the best potatoes I’ve ever eaten).

Given this dichotomy, I began to see that there was some sense to Amin’s monstrous hotel. Perhaps it could have been the hotel that served the average tourist, a middle ground between the modest UWA bandas and the luxurious Apoka Lodge.

And it seems I’m not the only one to think so. Last year, a Swiss hotel chain placed a bid to develop Amin’s old hotel, but abandoned (again) the project when their surveys placed a 2 million USD price tag on rehabilitating the structure. Meanwhile, the Uganda Wildlife Authority has hired various Ugandan media firms to rebrand Uganda’s National Parks in a way that might appeal to Ugandan tourists, in a bid to lessen dependence on foreign tourists. Unlike previous advertising pushes, Kidepo has been included in the campaign.

But as much as tourism dollars can lead to development, a certain amount of development is first necessary to attract the tourist dollars. Currently, the state of the infrastructure across the region makes it difficult for tourists to even arrive in Kidepo, and once there, they cannot purchase basic food and goods. To solve this problem, UWA and Wildlife Conservation Society, a USAID funded organization, have launched a Northern Uganda Development Initiative, which touts a strategy that holds that the best way to develop tourism in Kidepo is to also invest in development in the surrounding area.

Local villagers seem to agree. Just outside of Kidepo, villagers grew sick of elephants trampling their gardens. In return for drilling new bore-holes in the village, they allowed a new safari lodge called Nga’Moru to be opened on their land. At between 120 to 220 dollars a night, Nga’Moru has positioned itself as the midway point between the UWA bandas and the upscale Apoka Lodge.

Many conservationists and wildlife lovers tell me that they find Kidepo to be the most beautiful of Uganda’s national parks. With the end of regional violence and cattle rustling on the wane, Kidepo Valley seems to be benefitting from renewed drives to attract investment in tourism. But because tourism relies on some level of regional development even before it can provide the income to perpetuate that development, the question of tourism actually reflects the questions of the region. Is it possible that tourists in Kidepo can drive new development? Or in the future, will Amin’s abandoned hotel be joined by the rubble of other tourist projects that end up proving to be little more than hope and hubris?