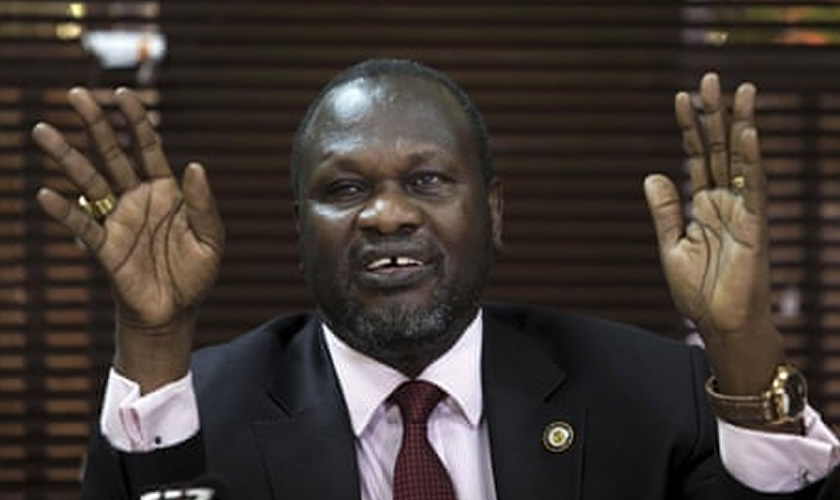 South Sudan’s rebel groups are cautiously celebrating the sudden reappointment of their exiled leader as the country’s vice president, although it is not clear whether he will return home to take up the post.

President Salva Kiir restored Riek Machar to the post in a surprise decree, but opposition figures have criticised the government for its “random” approach to implementing a recent peace deal.

Machar abandoned the vice-presidency in December 2013 as civil war broke out between the government and rebel forces loyal to him. Since then, the conflict has claimed tens of thousands of lives and displaced more than two million people.

A peace deal signed in August 2015 was supposed to stop the fighting, but implementation has been patchy: a recent African Union report noted at least five separate ceasefire violations, including one incident in which 50 civilians suffocated to death after being locked into a shipping container by government forces.

Though a key condition of the deal was the creation of a “government of national unity” with Machar as vice-president, rebels said the method was worrying.

“We welcome the appointment even though we expect the government to show more commitment on outstanding issues,” said Colonel Roman Nyarji, Machar’s spokesperson.

Nyarji identified three key areas of concern: Kiir’s decision to expand the number of states in South Sudan from 10 to 28, which Machar says violates the spirit of the peace agreement; the recent amendment of the constitution which expanded the president’s powers; and the implementation of various security arrangements envisaged in the peace agreement.

It remains uncertain whether Machar intends to take up the vice-presidency.

“If I get the support needed for the implementation of security arrangements, I think within a few weeks I will be able to take up my position,” Machar told news agencies on Friday.

Kier and Machar have presided over a conflict that has displaced more than two million people. Photograph: JULIO BRATHWAITE/UNMISS/HANDOUT/EPA

Nyarji said a condition of Machar’s return would be the renewed presence of troops loyal to him in the capital. “[Opposition] forces must be in Juba in good number before Machar steps foot [there]. Otherwise, good luck to South Sudan,” he said.

This condition appears to contradict a key provision of the peace agreement which calls for a demilitarised zone to be created in Juba.

Nyarji said that it is too early to say whether Kiir’s decree can be accepted in good faith. “Our concerns are now that the government in Juba is implementing the peace agreement randomly.

“The appointment of the chairman [as vice-president] is supposed to come after finishing up [the] drafting of the constitution, and passing it by the interim period parliament,” he said.

Observers are sceptical that this latest development will improve the situation, even if Machar does take up the position.

“I think that the history of animosity between the two parties in South Sudan as well as the fractured nature of the opposition groups likely indicates that this is yet more rhetorical progress that will not impact the situation on the ground,” said Frank Charnas, head of Afrique Consulting.

“I see very little precedent to suggest that the situation will be impacted by any agreement made by leaders who are becoming increasingly removed from their populations’ reality.”

Johnny Carson, former US assistant secretary of state for Africa, agreed, telling the New York Times: “On the face of it this is a positive gesture toward implementing the agreement, but whether this is going to be sufficient to bring about long-term advancement and stability has yet to be seen.”