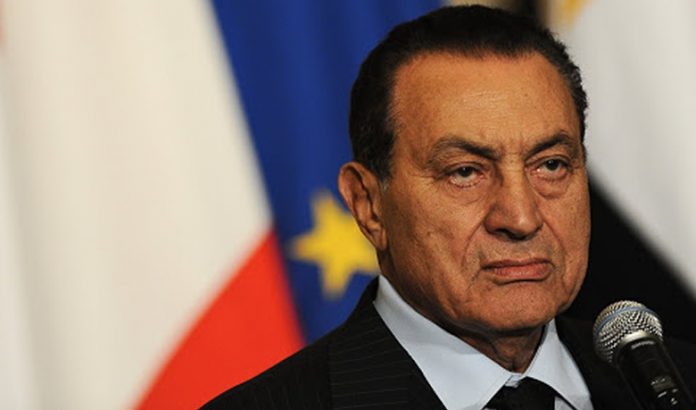 Egyptian President Hosni Mubarak appointed a new interior minister on Monday as part of a revamped cabinet designed to defuse the most serious challenge to his rule in three decades.

But it was not immediately clear if the line-up, which now includes three former senior officers at the top, and promises of reform would be enough to mollify opposition groups and protesters calling for Mubarak and the old guard to step down.

As the unprecedented unrest in the Arab world’s most populous nation entered a seventh day, thousands of protesters poured into Cairo’s Tahrir Square chanting “Get out … We want you out” and singing Egypt’s national anthem.

Soldiers looked on without taking action, which would have been inconceivable just a week ago.

World leaders struggled to respond to a crisis that threatens to tear up the Middle East political map. And in global markets, share prices fell across Asia on Monday and Brent oil hit a 28-month high.

The protests broke out last week when frustration over repression, corruption and the lack of democracy under Mubarak’s 30-year-rule boiled over.

More than 100 people were killed in clashes with security forces in scenes that overturned Egypt’s standing as a stable country, promising emerging market and attractive tourist destination.

Mubarak, a close U.S. ally and a stalwart in Western policy towards the Middle East, responded by offering economic reform to address public anger over hardship.

The army now appears to hold the key to his fate but although the generals have held back from crushing the revolt, they have also not withdrawn support for Mubarak.
Mubarak on Monday named General Mahmoud Wagdy, previously head of Cairo criminal investigations department, as the new interior minister, sources said.

Wagdy’s predecessor was reviled by many Egyptians because of the repressive tactics used by the police force to quash the opposition and criticism of the president.

In the early days of the uprising no clear political opposition grouping was evident. But on Monday the Muslim Brotherhood, an Islamist opposition group, said it was seeking to form a broad political committee with Mohamed ElBaradei to talk to the army.

ElBaradei, a Nobel peace laureate and former head of the U.N. nuclear agency, has urged Mubarak to go and lent his international stature to a movement that has lacked a leader.

The brotherhood, which has wide support among poor Egyptians, has until now kept in the background of an uprising spearheaded by the young urban poor and students, fearing a harsh crackdown.

Crowds flocked in the morning to Tahrir Square, which has become the focus of the uprising, to join protesters who had camped out overnight in defiance of a curfew imposed by Mubarak.

Witnesses said camaraderie between the protesters and soldiers was evident as they shared tea and snacks, standing by tanks daubed with anti-Mubarak graffiti.

“The army has to choose between Egypt and Mubarak,” read one banner in Tahrir Square.

The United States, which has poured billions of dollars of aid into Egypt since Mubarak came to power, stopped short of saying openly that it wanted him out. President Barack Obama and Secretary of State Hillary Clinton instead urged reform and spoke about “an orderly transition”.

Washington has long seen Mubarak as a bulwark in the Middle East, first against communism then against militant Islam.

As the first Arab country to sign a peace treaty with Israel, it plays a key part in the peace process, and a change in administration could have big implications for those efforts.

Middle East peace envoy and former British Prime Minister Tony Blair said it was inevitable that Mubarak would go and that change would come.

“The question is what change and how do you manage it,” he told Sky News from Jerusalem. “The Western governments, America, the European Union, have got to get themselves into position where they cannot merely commentate on this situation but help partner that process of change.”

The crisis in Egypt follows a revolt that toppled the leader of Tunisia three weeks ago and the wave of popular anger is also sweeping other countries in North Africa and the Middle East.

Foreign governments scrambled to ensure the safety of their nationals trapped by the unrest. One group of tourists was hunkered down in the Marriott Hotel in the Egyptian capital waiting to be taken to the airport.

“I had heard a lot about Egypt’s history and the pyramids so I am very disappointed I cannot see all that, but I just want to get out,” said Albert So, an accountant from Hong Kong.
American Susan Market, 43, from Ohio, said she saw a demonstration in Luxor.

Security, which disintegrated on Saturday and Sunday when police withdrew from the streets, has slowly been restored. Extra troops sent into cities across Egypt helped calm panicked residents and stop looting.

Egypt’s financial markets and banks were closed for the second day in a row.

Global shares continued to slide on Monday while Europe’s benchmark Brent crude was just short of $100 a barrel on fears the unrest could spread among regional oil-producing nations.

Moody’s downgraded Egypt to Ba2 with a negative outlook on the back of the protests.