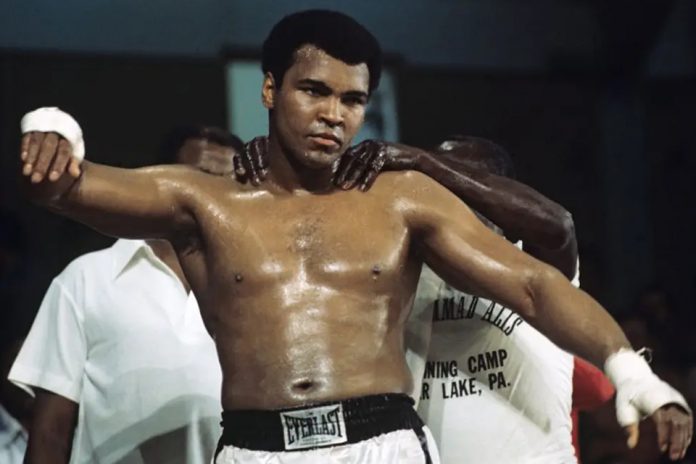 Boxing legend Mr. Muhammad Ali has finally touched his roots to Ennis, County Clare, Ireland, to pay homage to his Irishgreat- grandfather, Abe Grady, last week The American pugilist, the greatest sports man of the 20th century, floated to the Shannon Airport en-route the Irish town of Ennis in company of his wife Lonnie, where he was given a first Honorary Freeman of Ennis.

At the town’s main square where the reception took place, thousands who gathered defied the huge traffic to catch a glimpse of the greatest sportsman of our generation. At the reception, he was awarded a scroll entitled “Heart of Oak,” and unveiled a granite plaque that was taken to the Turnpike where it was affixed to a specially commissioned sculpture in honour of Ali’s visit. The sculpture depicts two gloved hands holding the world aloft.

Muhammad Ali, whose real name is Cassius Clay, was able to trace the genealogy of his great-grandfather, Abe Grady, born in the Turnpike Road area of the town in the 1840s.

The sixty-seven-year old legendary heavyweight boxing champion has been battling Parkinson’s disease for 25 years but was so moved by the reception he received that it gave him a jolt of energy to move about for a while shaking hands and waving to his fans while floating like a butterfly. In a dramatic moment, he gave a kiss on the cheek to one boy who was in a wheelchair.

Muhammad Ali`s great grandfather, Abe Grady, emigrated to America in 1860s where he met and married a free slave African- American woman who gave birth to the boxing legend. However, it was not until 2002, that his Irish links were discovered. Remarkably, among the 44 United States of America presidents, 17 (including Barack Obama) have traced their roots to Ireland.