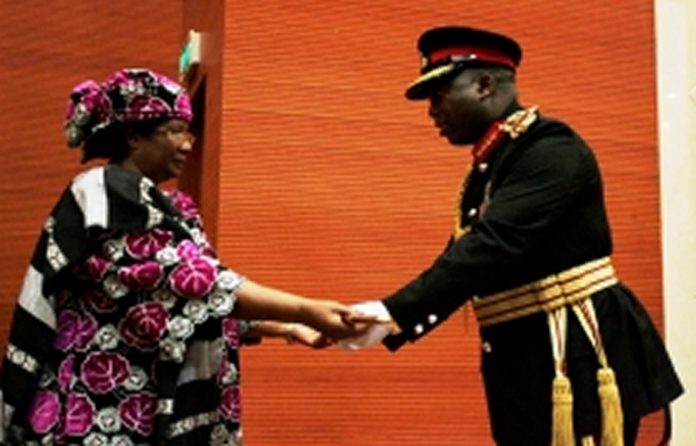 A champion of women’s rights, Joyce Banda has become the first female head of state in southern Africa after taking over as Malawi’s president following the death of Bingu wa Mutharika.

As vice-president, the mother of three assumed the top job in the landlocked and impoverished country on Saturday under the terms of the constitution.
The 61-year-old cuts a maternal figure that presents a stark contrast to her professorial predecessor, who styled himself the “Economist in Chief”.

A winner of national and international awards for her work as a supporter of women’s rights, Banda was last year named by Forbes Magazine as Africa’s third most powerful female politician after Liberian President Ellen Johnson Sirleaf and Nigerian Minister of Finance Ngozi Okonjo-Iweala.

She will hope her influence stands her in good stead as she looks to rebuild ties with Malawi’s main foreign donors – including former colonial power Britain and the United States – who had squabbled with and been alienated by Mutharika.

Until now the policeman’s daughter has spent a lot of her time and energy campaigning on behalf poor rural African women, trying to persuade them they should not simply accept the existence they have inherited.

She has said her ambition is to set women on the world’s least developed continent free from the cycle of poverty and abuse that has haunted them for centuries.
In an interview late last year, she cited the case of a childhood friend in her ancestral village as one reason she has kept on campaigning.

She said her friend, much brighter than herself, was forced to leave high school after just one term because her family couldn’t afford the $12 needed for the school fees.
“I went on to go to college and I became the vice president of Malawi. She is still where she was 30 years ago,” Banda said in the interview with the Global Post.
“The vicious cycle of poverty kept her there and took away her options. I made up my mind at that point, whatever would happen in my life, I would try to send girls to schools.”

EXPERIENCE IN GOVERNMENT
This personal pledge was behind Banda’s decision to complete a Bachelor of Arts Degree in Early Childhood Education from Columbus University in the United States.
Setting up a garment manufacturing business and later a bakery, she said she used the proceeds to send underprivileged girls to school.

She also founded three major organisations in Malawi: the National Association of Business Women, the Young Women’s Leaders Network, and the Joyce Banda Foundation.
“We know that early marriage, early pregnancy, and early death of young women in childbirth are connected to how long they stay in school,” she says.

The campaigning for women’s rights did not stop when she joined the government in 2004. As Minister of Gender, Child Welfare and Community Services she fought to get a domestic violence bill enacted.
She became Minister of Foreign Affairs in 2006 and the country’s first female vice president in 2009.

A year later Banda was kicked out of the ruling Democratic Progressive Party (DPP) as Mutharika pushed to groom his brother Peter, Malawi’s foreign minister, as his replacement.
Creating her own People’s Party, Banda maintained her state position as vice president.
She is married to Richard Banda, a former chief justice of Malawi and Swaziland.
Banda’s presidency seems set to usher in a fresh opportunity for Malawi, and many will be hoping that under her leadership the small southern African state can reclaim its tourist brochure reputation as “The Warm Heart of Africa”.