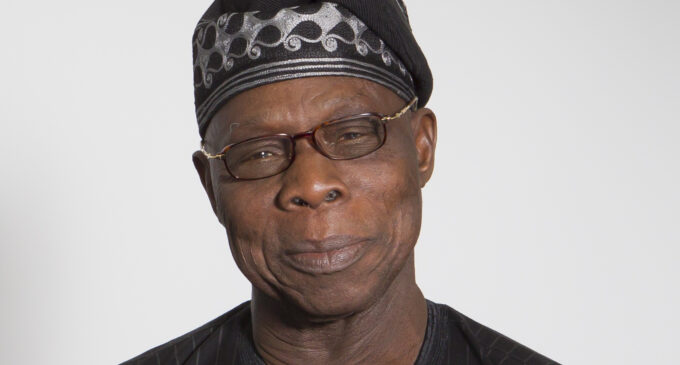 Reports just in are saying that the Ogun State chapter of the Peoples Democratic Party (PDP) has expelled former president Olusegun Obasanjo from the party after he publicly destroyed his membership card. And photos just emerging show Alhaji Surajudeen Oladunjaye – an aide of the maverick politician – helping him rip the card while receiving members of his Ita-Edo Ward 11 of the PDP at his Hilltop residence in Abeokuta on Monday.

A statement expelling Mr. Obasanjo from the party  said the former President had to be ex-communicated following a series of  anti-party activities,’unbecoming of a highly celebrated party man’.

“The totality of the executive, leaders and members of the Peoples Democratic Party (PDP) family in Ogun State hereby state categorically as from today Monday 16th of February 2015, Olusegun Aremu Obasanjo stands expelled and ex-communicated from the party,thereby loosing all rights,previous privileges and respect of our teeming party members,” the statement signed by the PDP’s  state chairman, Bayo Dayo explained.

“The general public especially the media are to take note that whatever Obasanjo does or says must no longer be seen from the prism of a PDP leader. Indeed he seems to have lost all sense of proper behaviour expected of a man who previously used and abused the opportunity provided him by the PDP  “It is ironic that this is the same Obasanjo who when he was President never tolerated nor accept any opinion, suggestion or criticism of his tenure,” the statement added.

Some reports say Mr Oladunjaye who led the Ward group to Obasanjo’s home tore-up his membership card on his express orders amid song and dance to anti-PDP chants.

It has also emerged that on February 12, the PDP’s Ward 11 of Abeokuta North Local Government (Obasanjo’s Ward) had written a letter expressing serious concerns at the former president’s numerous anti-party activities and uncomplimentary utterances targeted at the leader of the party, President Jonathan.