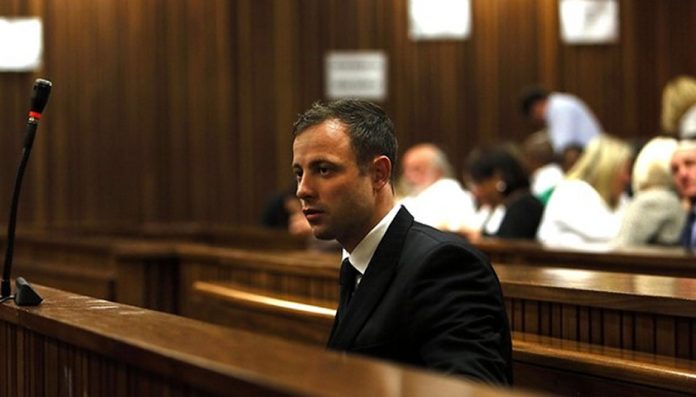 Oscar Pistorius, the South African Olympic and Paralympic star, faces possible imprisonment after being found guilty of culpable homicide in the shooting of his girlfriend as a drama-filled six-month trial reached a climax on Friday.

The 27-year-old stood and showed little emotion as Judge Thokozile Masipa read her judgment, which included finding him guilty of negligently firing a pistol at a busy Johannesburg restaurant in a separate incident.

He was acquitted of murder and of two separate firearm-related charges. His bail was extended and the court will sit again on October 13 when the sentencing process will begin.

The sentence for culpable homicide, or manslaughter, in South Africa can range from a fine or suspended sentence to a lengthy prison term.

The double-amputee’s uncle, Arnold Pistorius, later read out a statement to the media in the court in the capital Pretoria saying the family was “deeply grateful” to the judge for finding him not guilty of murder.

“That’s a big burden off our shoulders and Oscar,” he said. “We never had any doubt in Oscar’s version of this tragic incident . . . There is no victor in this.”

Nathi Mncube, spokesman for the National Prosecuting Authority, told South African television that the state was disappointed with the decision, but will “accept and respect” the judgment.

“The matter has not been concluded, we have to wait until there is sentence to decide . . . options that might be available to us,” he said.

Mr Pistorius’s acquittal of the murder charges rested heavily on Judge Masipa’s conclusion that he genuinely believed that an intruder was in the house at the time of the shooting and that he felt he and his girlfriend, Reeva Steenkamp, were at risk.

“Although it is not necessary for the state to prove motive, there is no basis on which this court could make inferences of why the accused would want to kill the deceased,” said Judge Masipa.

But while reading her judgment over two days, the judge was also highly critical of Mr Pistorius’s actions, saying he was negligent, and accusing him of being a “very poor witness” who was “evasive”.

“Evidentially, material before this court, however, showed that the accused acted negligently when he fired shots into the toilet door,” said Judge Masipa. “A reasonable person . . . would have foreseen the possibility that whoever was behind the door might have been killed by the shots.”

Mr Pistorius has always insisted the shooting was a terrible accident after he mistakenly thought someone had broken into his home in Pretoria during the early hours of Valentine’s Day last year. He killed Steenkamp, a 29-year-old model and law graduate, by firing his 9mm pistol four times at the locked toilet door of an en-suite bathroom.

His defence had argued that the athlete – dubbed the “blade runner” because of the distinct carbon fibre blades he runs on – had a heightened fight response because of his disability. It also claimed he was in a frightened and vulnerable state at the time of the shooting.

The prosecution countered by portraying Mr Pistorius as a self-centred, short-tempered gun enthusiast who was at times economical with the truth.

Judge Masipa said that while many people in South Africa have experienced crime, “they have not resorted to sleeping with firearms under their pillows”.

Mr Pistorius was born without fibula bones in his legs but overcame this to become a global star. At the 2012 London Olympics, he reached the semi-finals of the 400 metres after fighting for his right to run against able-bodied athletes