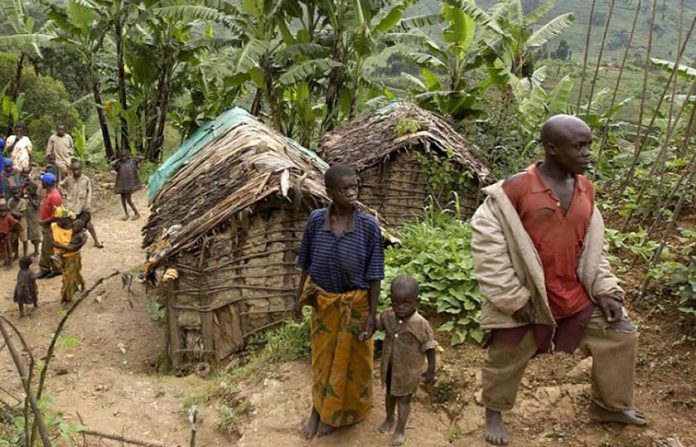 Twenty years after the Rwandan genocide, the general summary of the event is well known: Extremist Hutus slaughtered Tutsis wherever they found them, and some 800,000 people died. A clause is often added to this basic outline, noting that moderate Hutus were also killed, to show that the horrific dynamics of 1994 were more complicated than one ethnic group trying to wipe out another.

The real picture is even more complex than that. And one dimension often forgotten by scholars, journalists, and activists alike is that there is a third ethnic group in Rwanda. This group’s experience in the genocide was a terrible one — and so is the story of what happened to it once the mass killings stopped.

The group is called the Twa, or Batwa, and it is Rwanda’s smallest ethnic group (less than 1 percent of the population). The Twa are often referred to as “pygmies” because of their relatively short stature. Philip Gourevitch’s famous book on the genocide, We Wish to Inform You That Tomorrow We Will be Killed With Our Families, begins with the author having a conversation with a Twa man: “I wouldn’t have guessed he was a pygmy: he was nearly five and a half feet tall….Pygmies were Rwanda’s first inhabitants, a forest people, who were generally looked down upon by Hutu and Tutsi alike as a vestigial, aboriginal lot.”

Indeed, the Twa have long been Rwanda’s most marginalized group, seen as inferior because they traditionally lived in forests and foraged off the land, as opposed to farming it or raising livestock. According to the anthropologist Christopher C. Taylor, Twa in the pre-colonial period were viewed by other ethnic groups as “less than human” and were sometimes killed as human sacrifices to limit excess rainfall.

Under colonialism, during which the Belgian authorities favored the Tutsis as a group, many Twa worked for Rwanda’s Tutsi court. According to researchers Jerome Lewis and Judy Knight, this “was seen as favouritism by the Hutu whose life had become considerably harder” under colonial rule. Even as some benefited from a patronage system, the Twa increasingly lost access to their ancestral forests due to rising demand for arable land, a dynamic that accelerated after Rwanda gained independence in the early 1960s.

Even the modern conservation movement pushed Twa out of the forests; in 1988, for instance, they were expelled from the Nyungwe forest to make way for both a national park and a military training area. Many Twa began to make pottery in order to earn money, but Hutu farmers frequently seized the marshes the Twa needed for clay. On the eve of the 1994 genocide, a survey by the World Rainforest Movement found that only 1.6 percent of some 4,500 Twa interviewed had enough land to feed their families.

In the months leading up to the genocide, Hutu radio stations broadcast stories that accused the Twa of assisting the Rwandan Patriotic Front (RPF), the predominantly Tutsi rebel group that opposed Rwanda’s Hutu government, and urged listeners to take action. At least 11 Twa villages were subsequently attacked and burned.

The perceived link to the RPF also proved lethal to the Twa once the genocide began in full. Twa were told by Hutu fighters, “first we will kill the [Tutsi], then we will kill you” and “your turn will come,” according to a report by the Unrepresented Nations and Peoples Organization (UNPO).

In the community of Ntyazo, several Hutu militia members stopped a group of Twa villagers, including children, at a roadblock and massacred them. Lewis and Knight also obtained testimonies from survivors describing the deliberate murders of Twa:

When the massacres started my brother and I, with other people, fled to Nyarutarama. … Another thing to mention is the death of a large number of Twa who were killed at Kibagabaga primary school. Before I fled, Karamage (a Hutu) came and asked me if we could go and eat the cows of those who were killed….[He later said] if he saw any of us the next day he would kill us like the Tutsis. (Twa man, age 46)

Members of Hutu militias, however, were not the only ones who killed Twa; in some locations, the RPF did the same as it advanced toward Kigali, seeking to overthrow the Hutu regime. For example, the UNPO reported that, in June 1994, RPF fighters killed displaced Twa in the Gitarama region.

Troublingly, some Twa also took part in the country’s communal violence. The UNPO documented “exceptional cases” of Twa who claimed that Hutu fighters forced them or their family members — under the threat of death — to kill Tutsi.

Others may have done so willingly, though the reasons why are not clear. Gourevitch writes in We Wish to Inform You that some Twa men “were enlisted by Hutu militias as rapists — to add an extra dash of tribal mockery to the violation of Tutsi women.”

Although exact figures are impossible to come by, according to some estimates, about 10,000 Twa (30 percent of the group’s population) are believed to have been killed or to have died during the genocide. A similar number fled the country. And for those who remained or returned, life did not improve much after 1994.

In no small part, this is because the RPF regime, which took control of Rwanda after the genocide and has governed ever since, has made policy decisions that have either neglected or discriminated against the Twa. One such policy is the government’s famous effort to erase ethnic and other designations, as codified in Rwanda’s 2003 constitution.

While reasonable in theory, human rights activists have argued that the government uses an emphasis on “national unity” as a way to suppress political dissent. The policy has also been harmful to the Twa: It means that the government does not sufficiently acknowledge that they are marginalized specifically because of their ethnicity.

This discourages solutions for the Twa’s particular challenges, which include rampant unemployment, a persistent, disproportionate lack of land, and discriminatory norms that date back centuries. (Some Hutus and Tutsis, for instance, have traditionally refused to share food or drink with the Twa or to marry them.)

In fact, the government has at times deliberately ignored these problems and their deep roots: In a 2001 report, Rwanda’s National Unity and Reconciliation Commission said, “Well before the colonial era…Hutu, Tutsi and Twa were all Rwandans on an equal footing.”

Authorities have asserted that, in speaking for themselves as a group, the Twa are behaving as “divisionist[s],” which is explicitly prohibited under the constitution. In 2004, the Ministry of Justice said it would “stop NGOs from funding programs specifically targeting the [Twa] if they insist on being designated as such,” leading some organizations to limit their own programs.

The same year, the government instructed a small Twa organization to change its name and remove any reference to the Twa as an indigenous people. Until it did so, the government said the group would be denied legal status. In 2007, the group relented and became Communauté des Potiers Rwandais (“Community of Rwandan Potters”). Today, it can only refer to the Twa as potters. One of its leaders has called the Twa “invisible” to the government.

The government’s genocide compensation authority has also neglected the Twa. In 1998, the government set up the Survivors Fund (known as FARG) to help those who endured acts intended to “exterminate or destroy their person because of their ethnic origin” or “because of their opinion or…those of close relatives who were against genocide and massacres.”

Research has shown that the funds “in many communities have been overwhelmingly channeled to Tutsi,” but not always because they qualify for it: Money has been given to Tutsi returnees from nearby countries who left Rwanda well before the genocide. (President Paul Kagame has denied that FARG favors the Tutsi. In 2001, he called accusations that the program “is a way of discriminating [against] Rwandan people…groundless.”)

To be sure, the government has made some decisions in favor of the Twa. In 2006, for instance, the president appointed a Twa senator. Yet such moves are token at best, particularly when weighed against government policies that continue to violate the Twa’s rights. It is a story that shouldn’t be overlooked as the world recalls Rwanda’s genocide and considers the country’s future.

As Christopher C. Taylor has written, advocating for the Twa, “Racism cannot be eliminated piecemeal, simply by diminishing it between some groups and not others; it must be attacked as a totality…. Otherwise its germs can persist, threatening to reinfect the body politic.”