Should Africa Have a Single Passport? 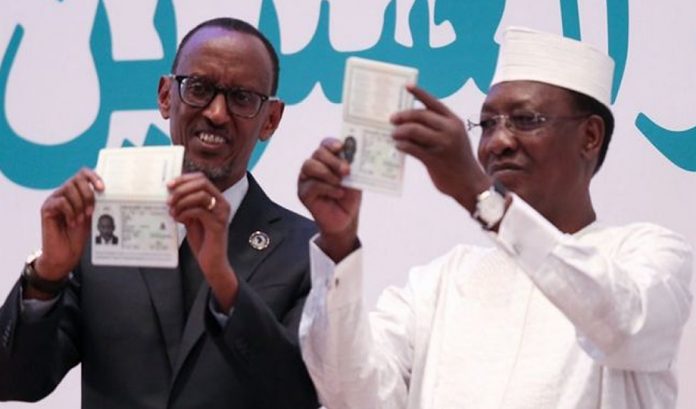 Rwandan president Paul Kagame and Chad President Idriss Deby received the first two African Union passports. The African Union has launched a new passport. A lot remains unclear about the document but here is what we do know:

What is the African passport?

The idea behind the passport, which was launched this weekend, is for all African citizens to be able to travel throughout the continent without visas.

There are two passports – one issued by the African Union for officials and people who travel a lot on business, and the other by individual countries for everyone else.

It will bear the African Union’s name and that of the issuing country.

Why have they been introduced?

But this is unusual.

The Africa Development Bank report on visa openness found only 13 out of 55 countries allow all Africans to enter either without a visa or to get one on arrival.

Many countries still do more business with their former colonial power, than with their neighbors.

AU Deputy Chairman Erastus Mwencha told the BBC that the issue of free movement had been “on the table” for 25 years.

He believes that it is necessary for Africa to “harness” the talents, skills and labour of its population.

Who will get one?

At first it will be rolled out to African heads of state and top AU officials and foreign ministers.

The first recipients were chairperson of the African Union Idris Deby and Rwandan President Paul Kagame.

The ultimate goal is that all African citizens will be able to apply for an African Union passport.

The Senegal-Gambia border was closed for part of 2016
However, this still depends on countries passing the necessary legislation in their own countries.

It is unclear if everyone who applies for a new passport will automatically get an African Union one or if you have to request one.

It is also unclear if everyone will have to update their passport before travelling or if people will still be able to travel with their old passports.

All the African Union has said is that individual countries will make their own decisions on issuing passports.

Which countries will get them?

This means every African country apart from Morocco – although Morocco has just asked to rejoin the AU.

When will people get them?

Some heads of state have already been given an African Union passport. The full roll-out for African citizens is supposed to happen by the end of 2018.

However, details of that roll-out are sketchy.

One interpretation is that the strategy is not clear because the passport has been rushed through before all the necessary arrangements have been put in place.

Will they be secure?

It is a biometric, or e-passport, that meets international standards and will be modelled on the European Union one.

Mr Mwencha argues that they will be more secure than the current passports that are not biometric documents.

The old passports, he says, are easier to forge. He told the BBC it will be easier to track criminals and terrorists.

However, with all countries able to issue the passports, that means a lapse in a single country could affect the entire continent.

Why not just change the visa system?

It isn’t clear why a reciprocal agreement among all African countries to allow each others’ citizens through their borders without visas wasn’t made instead. It is possible that this may be seen as more secure.

The AU is also pushing for citizens of all African countries to be allowed to stay visa-free for 30 days across the continent, before the roll-out of the passports.

Will it actually happen?

AU Deputy Chairman Erastus Mwencha says not one country in the African Union has objected to the plan. So it only won’t go through if parliaments block it.

But again, the details of the plan are sketchy.

However, many African countries might be reluctant to open their borders, fearing a huge influx of people from other countries.

This might be especially true of South Africa, which currently hosts large numbers of migrants from across the continent, and has seen xenophobic attacks.

The impenetrable jungles forests of Bwindi are famous for hosting a considerable population of the mountain gorillas in Uganda while Volcanoes National Park is...
Read more

The impenetrable jungles forests of Bwindi are famous for hosting a considerable population of the mountain gorillas in Uganda while Volcanoes National Park is...
Read more
News

Namibia’s President Hage Geingob at the heroes event: he is calling a land conference in October Namibia will hold countrywide land expropriation talks as the...
Read more
Tourism

Tourism A Tool To Alleviate Poverty in Rwanda

Newspaper is your news, entertainment, music fashion website. We provide you with the latest breaking news and videos straight from the entertainment industry. Fashion fades, only style remains the same. Fashion never stops. There are always projects, opportunities. Clothes mean nothing until someone lives in them.