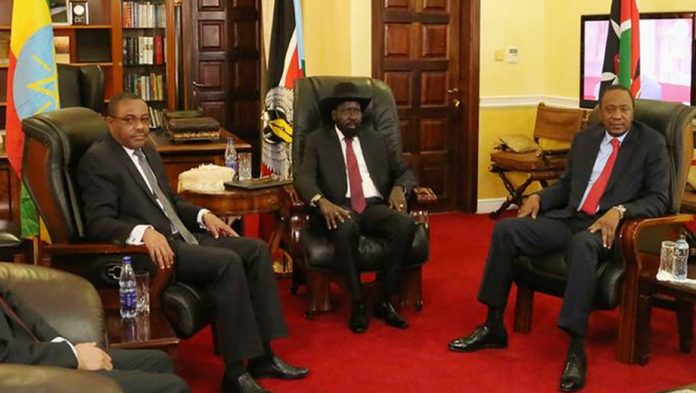 As a poor, landlocked, oil-dependent state with a long history of violent conflict and a belligerent neighbor to the north, South Sudan’s post-independence challenges were always going to be immense. But there was much hope that with wise leadership, prudent policy-making, an inclusive government and generous foreign assistance, South Sudan could leapfrog some of the post-independence crises that plagued other African countries.

Tragically, as evidenced by the violent events that have transpired over the past 10 days (for a useful backgrounder see this post by Max Fisher), South Sudan has fallen prey to one of the most pernicious sources of state failure in post-colonial Africa: the coup-civil war trap. This trap leads rulers to pursue ethnic political exclusion as a “coup-proofing” strategy but at the cost of engulfing their countries in violence.

The coup-civil war trap arises when political institutions are weak and ethnic groups are strong. Violence is dispersed among powerful Big Men who are embedded in and supported by different ethnic groups. And economic benefits are primarily derived from controlling the central government. Under such conditions, peace is often contingent upon power-sharing, in which the ruler strikes alliances with rival Big Men. These alliances allow the ruler to mobilize support and collect information from outside his own ethnic group, which in turn helps to secure peace and prevent civil war.

But the potential danger is that in sharing real power with ethnic rivals, the ruler leaves himself vulnerable to a coup d’état. And there’s the rub: the policy solution to civil war in these weak states increases a rival group’s capabilities to win power in a coup. In more technical terms, ethnic power-sharing in the shadow of the coup d’état gives rise to a commitment problem, in which the ruler fears that rivals are supporting him only to better position themselves to take power in the future.

This commitment problem is a key source of bargaining failure and conflict in weak states because it prevents rulers from fully committing to peaceful power-sharing. Reluctant to strengthen their rivals, rulers don’t share enough power.  Fundamentally mistrustful, they pursue defensive safeguards, such as stacking the military and security organs with members of their ethnic group and other loyalists, in a bid to neutralize their rivals’ coup-making capabilities. But this only undermines confidence in the ruler. Regime partners question the ruler’s commitment to power-sharing and, even worse, fear that, having used his comrades to get to power, he is ready to dispose of them by purge or execution.

In response, rivals counter-mobilize. Anticipating the worst, they prepare to launch preemptive strikes to defend themselves and their share of power. As the sides become locked into an internal security dilemma, eliminating the other side from power is seen as the only way out. Even though the ruler knows that purging ethnic rivals increases the risk of future conflict and forfeits the regime’s control over key societal groups and territory, he prefers the risk of a possible civil war tomorrow to the clear and present danger of a coup d’état today.

Broadly, this is what has transpired in South Sudan throughout the past year.  Salva Kiir, South Sudan’s president, sensed a growing threat from a number of his comrades in the Sudan People’s Liberation Movement, especially his vice president, Riek Machar, who made no pretenses about his ambitions for power. Kiir sought to emasculate Machar’s influence and power by first stripping Machar of his authority and thenremoving him as vice president (along with the entire cabinet). When violence broke out between rival factions in the presidential guard on Dec. 15 (in what Kiir publicly declared was a thwarted coup d’état), Kiir made a bid to eliminate the internal threat posed by Machar once and for all by arresting or killing him along with others opposed to the president, such as secretary general of the SPLM, Pagan Amum.

Having narrowly escaped Kiir’s purge and fled the capital, Juba, Machar is now seeking to mobilize his network of supporters, especially among his Nuer co-ethnics in his home region of Unity State, to try to reclaim power in an armed rebellion. Having forfeited any societal and territorial support among the Nuer, Kiir, leaning heavily on his Dinka co-ethnics, will find it difficult to fight a selective counterinsurgency campaign and will most likely resort to indiscriminate violence. For their part, the rebels will target perceived loyalists to the Kiir regime, using ethnicity as a heuristic device.

This path to regime breakdown and potential civil war is not unique to South Sudan; in fact the sequence of events is nearly identical those that led to the Chadian civil war between Hissène Habré and an insurgency led by his former chief of staff Idriss Déby in 1989; the Liberian civil war between Samuel Doe and Thomas Quiwonkpa’s deputies that also broke out in 1989; and Africa’s Great War in the Democratic Republic of Congo between Laurent Kabila’s regime and his former allies from eastern Congo and Rwanda that began in 1998.

The shadow of history is also very important in the South Sudan case. In 1991, Machar launched a failed bid to overthrow the then-leader of the Sudan People’s Liberation Army (SPLA), John Garang. The failed coup triggered an intra-SPLA civil war and large-scale violence along ethnic lines. Machar was prominently involved, mobilizing support from his co-ethnics and targeting Dinka co-ethnics of John Garang, including in the notorious Bor Massacre in November 1991, in which it is estimated at least 2,000 perished. Over the next decade, Machar would ally with the central government in Khartoum and continue to fight against the SPLA until he reconciled with Garang and rejoined the SPLM in 2002. The reunification of the SPLA was integral to the rebels’ ability to win the right to independence.

All civil wars are tragic. But this new armed conflict in South Sudan is especially so. Not only because so many South Sudanese who had hoped and prayed that independence would usher in peace and development are now once again fearfully fleeing their homes, like they did countless times in the past.  Not only because the mechanics of the conflict were utterly predictable, given how this pattern of state failure has played out time and time again in South Sudan and other African countries. But also because there was a potential path out of the coup-civil war trap that was not realized — namely the institutionalization of power competition through the ruling political party, the SPLM.

A growing body of scholarship points to the stabilizing effect of political parties and other political institutions in non-democratic regimes.  In investing in the party to allocate power, the ruler is credibly signaling his commitment to power sharing but also protecting himself from the coup d’état. The downside in delegating authority to the party, of course, is the ruler not only constrains his rivals but also constrains himself — which is exactly the point. This generates a new dilemma for the ruler, however: he does not want to strengthen the party only to see it abandon him and back someone else.

This was the dilemma that confronted Salva Kiir. The SPLM was supposed to hold its general convention in 2013 to elect a chairman and the party’s presidential nominee for the 2015 election. The holding of the convention would help to regulate the competition for power that was building among top regime elites. If it were to reaffirm Kiir’s chairmanship of the party, it could also go a long way toward consolidating Kiir’s power vis-à-vis his rivals.

But Kiir increasingly feared the possibility that the party might not reelect him as party chairman and would instead swing its support to Machar or Amum, the secretary general. In the face of such a possibility, Kiir maneuvered to undermine the party’s institutions. For example, he refused to call to order party organs in which he might be outvoted, such as the SPLM’s political bureau. He also tried to manipulate the convention rules to prohibit the secret ballot. Finally, he dismantled party structuresand postponed the convention indefinitely.

In short, Kiir rejected party rule for personal rule. In doing so, he managed to maintain his position as head of the SPLM, at the cost of leaving the power struggle at the apex of the regime unresolved and intensifying his own strategic uncertainty. The cost is that he has now brought South Sudan to the brink of civil war.