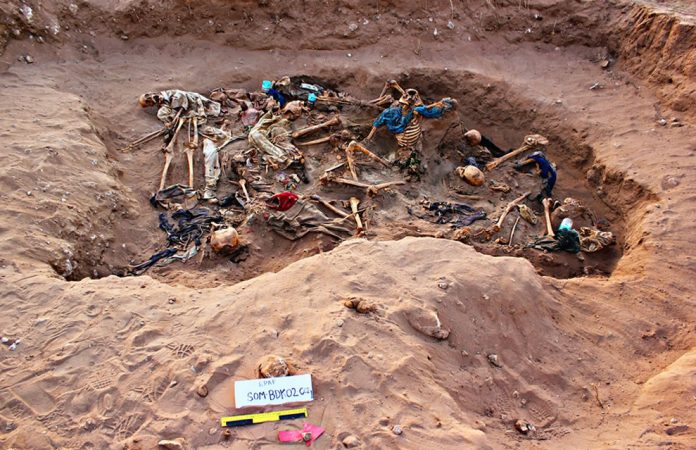 The Dilla Massacre, the shock in question, was a movement of mass killings organized against people from the Gadabursi group, by the people from the Issaq tribe. During and after the breakdown of the Somalia government in 1991.

As Somaliland, the self-declared independent state draws upon its 30th year, its darkest corner in history is still being buried under the sand, further adding to the long lists of atrocities the African continent has had to bear.

The Dilla Massacre, the atrocity in question,  was a series of mass killings enacted against members of the Gadabursi tribe, by the members of the Issaq tribe. During and after the collapse of the Somalia government in 1991.

Years of clan tension fueled by Siad Barre, the former dictator of Somalia, erupted when the Isaaq rebel group, the Somali National Movement or SNM, used their Ethiopian backed militias to attack the state of Somalia, and also slaughter the Gadabuursi tribe.

In the 1980s, members of the Isaaq tribal grouping created a group, they decided to call the Somali National Movement or the SNM for short. The SNM’s primary headquarters and support were Ethiopia,  who wanted to rid the Siad Barre regime. The rebel group was benefitted by Mengistu Haile Mariam (former president of Ethiopia), and minimally by Muammar al-Gaddafi of Libya.

Ethiopia duly supported the SNM cross border attacks against the Somali government with infantry to support the raids. The great majority of these raids would be within Gadabursi territory, who lived in the border area between Ethiopia and Somalia. These cross border raids would heighten the further conflict between the two groups. In the spring of 1988, Barre and Mengistu arbitrarily agreed to cease support of rebel groups in the other nation.

In the summer of 1988,  the SNM, (which at the time temporarily lost Ethiopian support due to the Barre-Mengistu peace deal) launched surprise attacks against northern Somalia cities, causing an all-out civil war between the regime and the Northern areas of Somalia. While conducting these attacks, the SNM received further assistance from the Ethiopian military, with Mengistu neglecting the peace treaty signed with Barre. Anti-tank weapons, artillery, and rations were all given to the SNM, by Ethiopia, during their attacks. Mengistu continued to support the SNM and other Somali rebel groups, as late as November 1990.

Attacks on the Awdal Region

The majority of the SNM’s attacks on northern Somalia were against the Awdal region. The SNM embarked on a mining campaign in northern Somalia, the areas inhabited by the Gadabursi, were extensively mined by the SNM rebels, to prevent the Somali National Army from crossing the border and capturing the rebels.

To continue their attacks against the Somali National Army in the North, the SNM also installed car bombs into the vehicles of the Somali National Army. In the city of Borama, the largest Gadabursi city in Somalia. The car bombs caused extensive Gadabursi civilian casualties and caused chaos in the municipality. The Gadabursi people had enough and started a planned resistance to the SNM’s terrorism in their territory. The same year, the Somali government attacked innocent Awdal residents, in response to the SNM’s terrorism of the region. In 1989, the Somali Government has reportedly bombed Hargeisa and Borama, causing further chaos, panic, and fear among Gadabursi and Awdal residents. In January of 1990, the SNM penetrated Borama and killed 200 civilians, and displaced 5,000 people, causing mass devastation.

In January 1991 the Somali government collapsed, leaving Awdal citizens stranded and defenseless against the SNM terrorists. The Gadabursi refused to support the Siad Barre government and prepared to defend their state against rebels and violence.

Between January and March 1991, the SNM facilitated murder and violence towards members of the Gadabursi tribe.  Mass killings of those perceived to be against SNM were the only crime the victims were guilty of. The SNM’s militia was out of hand, Gadabursi people fleeing their violence were burned and looted on the national highway. SNM Bombardments and artillery had destroyed Dilla, the second biggest Gadabursi settlement in Somalia, town destroyed.

Entire families were murdered for being Gadabursi, and the SNM looted  Borama, the capital city of the Awdal region. The tribes of the north reported a joint SNM and Ethiopian attack on Borama, and these attacks caused over 80,000 people to flee to Ethiopia.

R.J Hayward and I.M. Lewis (2005) both state that Dilla was destroyed and plundered by the SNM as an act of revenge on the Reer Nuur subclan of the Gadabuursi:

“The major town of the Rer Mohamoud Nur, Dila, was thoroughly destroyed by the SNM and still lies in ruin, their rural and urban property has been almost entirely plundered by the SNM apparently to avenge the past fierce resistance put up by this group in particular and the Rer Nur in general, who occupy the buffer zone between the Isaq and Gadabursi.”

Local reports stated the SNM were not after the destruction of the Somali Regime in the late 80s, but rather, the Gadabursi tribe.  The Gadabursi town of Dilla, laid destroyed and in ruins by the SNM. Rural and urban property of Dilla civilians laid in the hand of SNM rebels, who declared they “settled centuries-old tribal scores”.

The Reer Nuur, a sub-clan of the Gadabursi, were the primary victims during this entire debacle. The Reer Nuur is a subclan of Gadabursi traditionally served as the buffer between the Gadabursi and the Isaaq. The assault against them was described as a way of “settling old scores”. The UNCHR states: Armed conflict also occurred which opposed the Gadabursi and the Issaq. In February 1991, “ethnic cleansing” by the SNM took place in the Boroma region, the main Gadabursi town (Inter-NGO Committee Apr. 1991, 71; Africa Research Bulletin 1-28 Feb. 1991,
The SNM continued their mass killings while occupying Borama and the surrounding areas. Thousands of Gadabursi fled into Ethiopia into the Tog Wajaale and Awbare refugee camps to escape violence.

In 2021, Somaliland is set to enter elections, priding itself on a beacon of democracy and self-choice, but anyone in the independent state, who dares mention the Dilla Massacre, is imprisoned and tortured. Please watch this video, of Awdal members of parliament asking for the release of youth commemorating their dead relatives.

Here is the video of the youth holding a remembrance, before their arrest.

AwdalPress of Somaliland had previously reported, the state declared any public memorials of the incident will result in the arrest of the individuals. These arrests have been occurring for the past 30 years. I urge all Africans to remember the Dilla Massacre and the victims of that tragedy, even when their own family members are jailed when doing so.