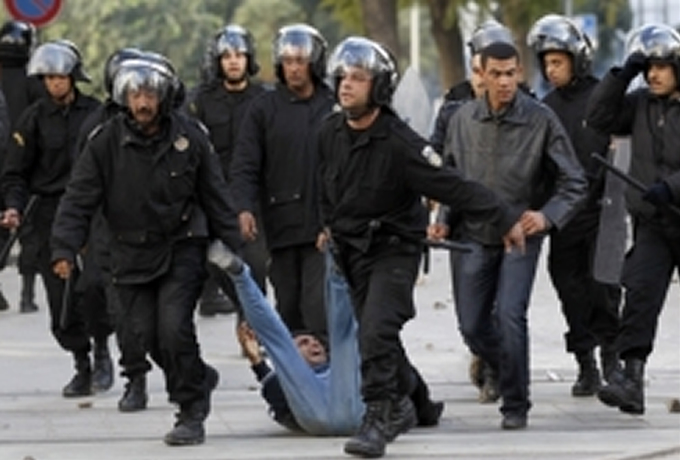 Tunisian special forces fought a heavy gun battle with members of the ousted president’s security force Sunday, a military source said, and the prime minister promised a new government would be announced Monday.
Fighting erupted near the presidential palace in a Tunis suburb in the evening, the source told Reuters, following other gun battles in the capital two days after Zine al-Abidine Ben Ali was ousted after more than 23 years as president.

However, Prime Minister Mohamed Ghannouchi promised rapid action to fill the power vacuum. “Tomorrow we will announce the new government which will open a new page in the history of Tunisia,” Ghannouchi said in a brief statement.
The military source, who did not want to be identified, said people loyal to the arrested head of Ben Ali’s security force had opened fire as they passed near the front of the palace.
“Special military groups came out (from the palace) to pursue them and they started to exchange fire,” the source said.

Two witnesses who live near the palace, in the Carthage area, several km (miles) from the center of Tunis, told Reuters by telephone they could hear heavy gunfire.
“There is firing from around the presidential palace, intensive and continuous,” said one woman. “It is a very loud noise. I think it is something more than just bullets.”
The official who was in charge of security for Ben Ali, who fled the country Friday after a wave of rioting, is to appear in court on charges of stoking violence and threatening national security. Al Jazeera TV said a replacement had been appointed.
The clashes suggested a worsening of violence following drive-by shootings and jailbreaks Saturday in which scores of inmates were killed.

State television reported earlier that two other gun battles had broken a relative calm enforced by the army in Tunis, one near the central bank building and another outside an opposition party’s headquarters about 1 km (half mile) away.
Military and police sources said security forces had killed two gunmen stationed on a rooftop near the central bank, state TV’s reporter said from the scene. A military official told the station that the two had been killed by fire from a helicopter.

Earlier, the opposition PDP party said police and troops had stopped a carload of armed men and shots had been fired outside its headquarters.
Tanks were stationed around Tunis and soldiers were guarding public buildings. Residents, some of whom had said they were starting to get back to normal life during daylight, rebuilt makeshift barricades from branches and trash cans to block their streets and protect property as a night curfew approached.

“We came out on the streets and dressed in white vests so we can identify one another. We told the police in the neighborhood that we are here and we’re dressed in white — it was during curfew hours … some brought sticks and we collected rocks,” one man told Reuters Television earlier in the day.
Analysts say there may be more protests if the opposition believes it is not sufficiently represented in a new government.

Sunday was not a working day but some people were shopping for food. For the first time in days, a few vans and pick-up trucks were making deliveries. On the highway heading north into Tunis, a group of youths with sticks and knives were stopping private cars and robbing them just a few kilometers from an army checkpoint, a Reuters Television crew said.
Showing their contempt for Ben Ali’s family, several hundred people filed through the empty, ransacked home of the former president’s nephew, Kaif Ben Ali, taking photographs, picking up plants as souvenirs and stripping out plumbing fixtures.

The villa is in the chic Mediterranean resort of Hammamet, about 60 km (40 miles) from the capital, where many of the moneyed elite close to the ousted president have their homes.

Speaker of parliament Fouad Mebazza, sworn in as interim president, had asked Ghannouchi to form a government of national unity, and constitutional authorities said a presidential election should be held within 60 days.

Ghannouchi held talks Sunday to fill the vacuum left when Ben Ali fled to Saudi Arabia after a month of protests over poverty, jobs and repression that claimed scores of lives.
Before Ghannouchi’s announcement, Ahmed Ibrahim, head of the opposition Ettajdid party, said order was vital. “The main thing for us right now is to stop all this disorder. We are in agreement on several principles concerning the new government.”
Opposition parties wanted assurances that presidential elections would be free, that they would have enough time to campaign, that the country would move toward greater democracy and that the power of the ruling RCD party would be loosened.
Two opposition parties have already said the two-month deadline for holding elections is too soon.

Opposition leader Najib Chebbi said after talks with Ghannouchi Saturday that elections could be held under international supervision within six or seven months.
Beirut-based commentator Rami Khouri said it could take a while for Tunisia’s disparate opposition of secularists, leftists and Islamists to consolidate and form alliances.
The ousting of Tunisia’s president could embolden Arab opposition movements and citizens to challenge entrenched governments across the Middle East.

“It was always said that the Arab world was boiling, but the continued state of stagnation made some doubt infiltrate minds. I think this doubt has now gone,” said Hany al-Masri, a Palestinian commentator based in Ramallah.
Hundreds of European tourists stranded by the unrest have been flown home on emergency flights.

Police said they had caught two men with Swedish passports after one of the shooting incidents, and state television quoted a security source as saying four people carrying German passports had been detained in the same incident.
It showed what it said were the detained foreigners, with blond hair and fair complexions, being guarded by armed police, and said the arms they were carrying included automatic weapons.

However, the Swedish news agency TT said the men were part of a Swedish group visiting Tunisia to hunt wild boar who had been attacked by a mob.