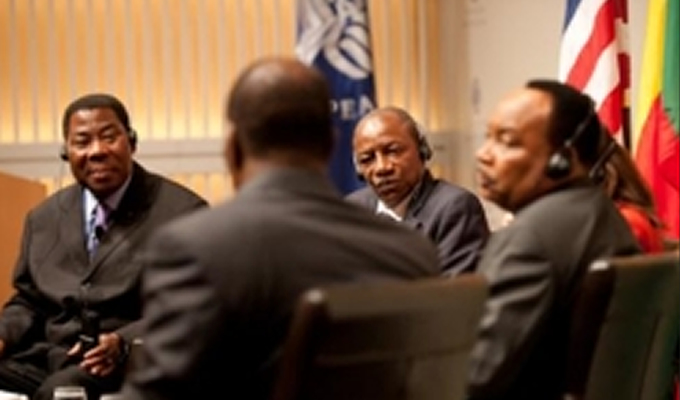 The event at the United States Institute of Peace Thursday was called Assessing Progress Toward Democracy in Francophone Africa.

Tara Sonenshine was the host. She greeted the four participants, the presidents of Niger, Guinea, Benin and Ivory Coast.

“Your presence here as a group is very powerful. And I know, individually, you hail from nations that have endured great pain and suffering, political instability, ethnic divisions and fragility. But as a group you challenge all the old stereotypes about the African continent.” Sonenshine said.

She said the four represented a new hope that the will of the people can prevail.
Long-time opposition leader turned elected president of Guinea, Alpha Conde, warned that without development for impoverished communities, democracy could become what he called a dead-end.

He also described an attack against him and his home earlier this month.

He explained his room was targeted by shots fired with bazookas and rocket launchers, but he says he knows not to always sleep in the same room, from all his years as an opposition activist.

Conde said he is angering high-ranking military officials by preventing some of their previously enjoyed corrupt practices and taking away their control of large parts of the country’s resource-rich economy.

Ivory Coast President Alassane Ouattara described how he spent more than four months trapped in a hotel after the now jailed incumbent President Laurent Gbagbo refused to leave power after losing elections last year. The impasse led to more deadly violence in a country which had already been divided for years by a rebellion.

Mr. Ouattara said democracy is not just about having democratic elections but making sure laws and freedom of choice are respected.

The elected president of Niger, who also spent decades in the opposition, Mahamadou Issoufou, said it was also important to have regional security to defend democracy.

He said Niger along with other countries in desert regions face the threats of cross-border networks of rebels, terrorists, arms traders and drug dealers who roam in difficult to police areas. He said this situation was worsening with the ongoing conflict in Libya.

The president of Benin, Boni Yayi, now in his second elected term, also pointed to increased piracy in the Gulf of Guinea, and said he would bring up the issue in a scheduled Friday White House meeting with U.S. President Barack Obama.

But he said he felt invigorated by the joint visit and the hope it brings for a democratic future in West Africa.

Yayi said democracy is a long voyage, with a destination that is never reached. He said in Benin he has noticed how important and difficult it is to get rid of widespread corruption and impunity.

The four presidents also appealed for the help of their diasporas to come back to their countries and invest in the private sector, as well as help from the international community for debt relief and more development aid.