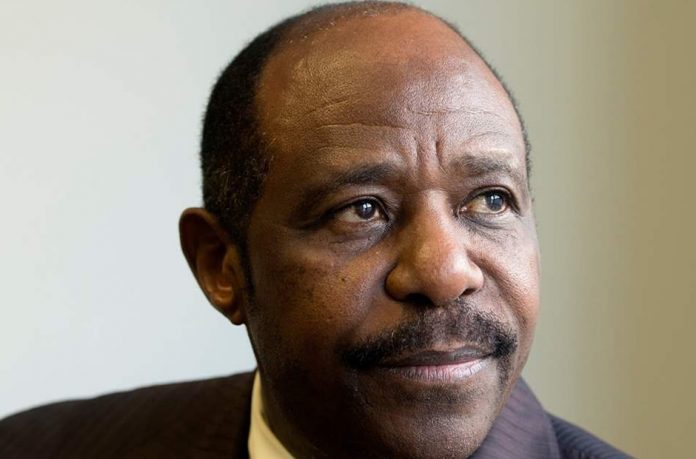 Paul Rusesabagina was born on June 15, 1954, in Gitarama, southern Rwanda. He reportedly holds Belgian citizenship and a US Green Card. Until his arrest, he had not been in Rwanda since 1996.

According to the Rwanda Investigation Bureau (RIB), Rusesabagina had been the subject of an international arrest warrant, wanted on charges of serious crimes against unarmed, innocent Rwandan civilians in the southern districts of Nyaruguru in June 2018 and in Nyungwe, Nyamagabe district in December 2018.

RIB said Rusesabagina is suspected of being a founder, leader, sponsor or member of extremist terror outfits including the Rwandan Movement for Democratic Change (MRCD) and PDR-Ihumure, operating out of various places in the region and abroad.

Rusesabagina’s family has reportedly denied the charges against him and urged Rwanda to transfer the case to an international court.

In a tweet Thursday, US Assistant Secretary of State for African Affairs Tibor Nagy said he had discussed the arrest with Rwandan ambassador to the US Mathilde Mukantabana and expects the Rwandan government to “provide a fair and transparent legal process for Rusesabagina.”

The MRCD allegedly has an armed wing known as the National Liberation Front (FLN) based in the Democratic Republic of the Congo.

Thierry Murangira, the spokesperson for RIB, could not divulge information on where Rusesabagina was arrested or the date of his arrest.

Murangira told reporters that naming the countries which helped enforce the arrest would jeopardize ongoing investigations.

“No one can kill Rwandans and go scot-free. It is a matter of time,” he warned.

Rusesabagina, 66, had reportedly been in Dubai in the United Arab Emirates last Thursday, where he departed legally the next day on a private jet, according to CNN.

The UAE has denied any involvement in the arrest.

But Rusesabagina is allegedly one of seven Rwandan leaders of various “terror groups” based in the region, especially in the eastern Democratic Republic of Congo, whose arrest warrants were issued through Interpol in March 2019.

He is the latest in recent Rwandan high-profile arrests.

In May, France helped arrest the top Rwandan genocide suspect Felicien Kabuga, who had evaded arrest for more than two decades, accused of financing the genocide.

Earlier, the spokespersons of the FLN, Captain Herman Nsengimana and Callixte Nsabimana, alias Sankara, had been arrested.

Paul Rusesabagina was born on June 15, 1954, in Gitarama, southern Rwanda.

He reportedly holds Belgian citizenship and a US Green Card.

Until his arrest, he had not been in Rwanda since 1996.

He worked at Hotel des Mille Collines in the capital Kigali during the 1994 genocide against the Tutsi ethnic group, the hotel then ran by Sabena, a Belgian aviation company.

Rusesabagina took charge of the hotel from April 16, 1994, a week after the genocide – in which more than 1 million people were killed – had started.

He gained fame after the 2004 Hollywood film Hotel Rwanda.

In the film, he is portrayed as a brave man who did his best to save the threatened Tutsi who had sought refuge in the hotel.

He claims to have rescued 1,200 Tutsi who had sought refuge in the hotel, using his influence as its manager to bribe and convince military officials to secure a safe escape.

But survivors at the hotel say Rusesabagina did not hide or save Tutsi from the genocide.

He reportedly centralized all authority, where he could allow in or reject whoever he wished.

Arrest not linked to the film

Rusesabagina’s arrest has nothing to do with the film Hotel Rwanda, according to Tom Ndahiro, a Rwandan-based researcher.

“There is no relationship at all. His arrest has more to do with what he declared himself, that he was waging a war against the Rwandan military,” Ndahiro told Anadolu Agency.

According to Ndahiro, in December 2018, when a group of insurgents from neighboring Burundi launched an attack on three passenger vehicles in Nyungwe National Park in Rwanda, which left many dead and others injured, Rusesabagina claimed responsibility for the attacks in different videos as having been orchestrated by the FLN.

“But as far back as 2011, Rusesabagina was linked to financing [rebels] of the Democratic Forces for the Liberation of Rwanda (FDLR). So his arrest was expected,” he added.

In one of the videos, Rusesabagina said “from July 2018, the FLN had launched a war to liberate Rwandans, using all possible means to bring change to the country after political means had failed.”

Rusesabagina received human rights awards for his purported efforts during the genocide, including the US Presidential Medal of Freedom in 2005 and the Human Rights Prize by the Lantos Foundation in 2011, recognitions criticized by the Rwanda genocide survivors.

IBUKA, the umbrella organization of Rwanda genocide survivors’ associations, accused Rusesabagina of “hijacking heroism and trading with the genocide.”

In a 2014 book authored by a survivor at the hotel, Edouard Kayihura entitled The Hotel Rwanda: The Surprising True Story…and Why It Matters Today, survivors from Hotel des Mille Collines testify that Rusesabagina played no role in their survival because he had no final say on what was happening in the hotel.

Rusesabagina set up the Hotel Rwanda Rusesabagina Foundation ostensibly to help genocide survivors, but Rwanda accuses it of collecting money from well-wishers to fund terror activities.

The international community was hoodwinked, turned a blind eye to Rusesabagina’s ulterior motives, and ignored the voices of genocide survivors who disputed his account, according to Ndahiro.

“Rusesabagina is a genocide denier and trivialized genocide openly, riding on the genocide to rise to fame through his words and actions, but no one could bring him to account.”