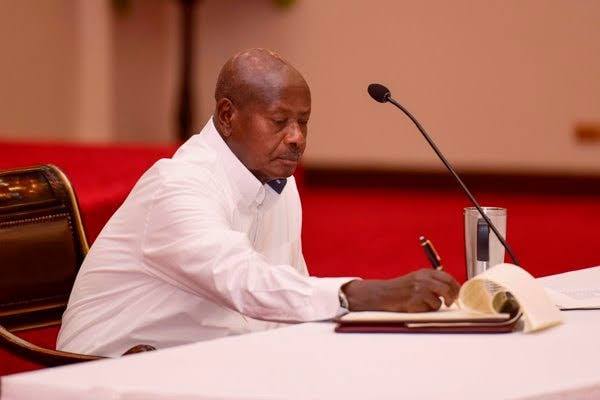 Ugandan President Yoweri Museveni appealed on Sunday for more international support to bolster the African Union force in Somalia during a brief visit to the capital Mogadishu.
Museveni met President Sheikh Sharif Ahmed at the airport along with Somalia’s new Prime Minister Mohamed Abdullahi Mohamed and some members of a fresh, streamlined cabinet that was approved by parliament on Saturday.

“We want more troops, from Uganda or from anywhere in Africa. Uganda is a country of 33 million people so we could mobilise 3 million people. But who will pay for it?” said Museveni, who faces a presidential election in February.

Uganda and Burundi provide all the 7,200 African Union soldiers in Mogadishu propping up a Western-backed government that has failed to stamp its authority on much more than a slice of the capital.

Two hardline Islamist insurgent groups control the rest of Mogadishu and much of southern and central Somalia. The African Union troops have so far prevented the rebels from toppling the weak government by defending key sites.

“I came to check on our troops and also to consult his excellency (President Ahmed). I am very pleased they formed a new government, have a new Prime Minister and are united. Our troops’ morale is very high.”

The AU and the seven-nation east African Intergovernmental Authority on Development (IGAD) have said it could take about 20,000 troops to help quell the insurgents in Somalia, a country without stable central government for nearly 20 years.
Uganda has said it could supply the whole force but wants Western nations and others to help foot the bill.

While there have been many pledges of international support for the Somali government, incessant infighting and rampant corruption have not helped its cause, while government soldiers have missed out on salaries for months.

The chaos in Somalia has also allowed piracy to flourish off shore. The number of successful hijackings by Somali pirates was at a five-year high in the first nine-months of 2010.
Somalia’s new prime minister, who has been in office for about a month, plans to recruit 8,000 government troops to push the rebels and foreign fighters in their ranks out of Mogadishu.

“My first, second and third priority is improving security. In the first phase we are going to recruit 8,000 government troops,” Mohamed told Reuters in an interview last week.
“Our initial target will be to drive the rebels from the capital Mogadishu and then the rest of the country. We shall not talk to foreign jihadists … who came here to harass our people and our country,” the prime minister said.