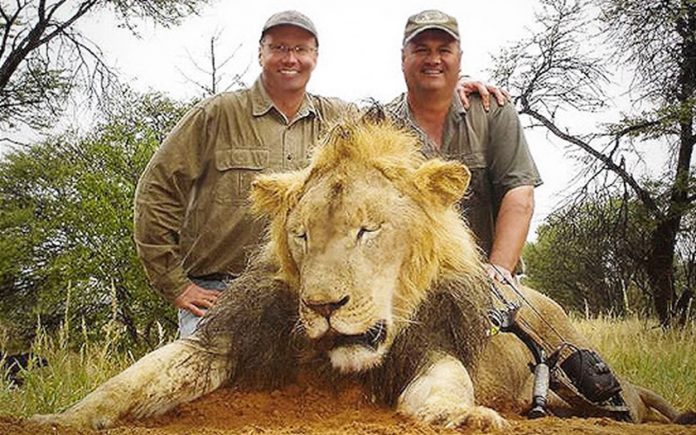 An immensely popular lion known as Cecil was killed recently outside of Zimbabwe’s Hwange National Park, after being lured beyond park boundaries before shooting him with a crossbow.

The 13-year-old black-maned lion, who wore a GPS collar and was part of an Oxford University research project, was found skinned on private property adjacent to the vast Africa wilderness preserve.

The death of Cecil, beloved by Hwange’s staff and its frequent visitors, cast a pall over the reserve, and left many stunned in disbelief.

Fueling the anger is that Cecil did not die immediately. The wounded lion was tracked for nearly two days after it was shot, and ultimately dispatched with a rifle.

According to the Zimbabwe Conservation Task Force, the hunting party used an animal carcass to lure Cecil outside the park boundary. Because the cat wore a GPS collar, it was simple to trace its final movements.

Though many lions have been killed after being lured to legal hunting zones with bait, authorities maintain that this was an illegal hunt.

Cecil had become accustomed to visitors in Hwange National Park. He was often spotted on the main road used by visitors, and had become a park icon and its most photographed animal.

His loss leaves a void in his pride that will be filled by another male lion, and that could jeopardize the health of Cecil’s 12 cubs, as a new lion establishes his dominance over the pride. (New males often kill cubs to encourage the female to mate.)

The hunter responsible for Cecil’s death, Walter Palmer, a dentist from Minnesota, has found himself at the center of global outrage last month after it was revealed that he was the one who had killed Cecil. Although he has not faced any legal charges in connection with that killing, he has been lying low ever since.

Cecil’s death has sparked a global outcry as the horrors of hunting in Africa continue killing our beloved and endangered species.

Dr. Jane Goodall, the founder of the Jane Goodall Institute, renowned primatologist and the U.N. Messenger of Peace, responded to the news of Cecil’s death also in a blog post on her website. “Not only is it incomprehensible to me that anyone would want to kill an endangered animal (fewer than 20,000 wild lions in Africa today) but to lure Cecil from the safety of a national park and then to shoot him with a crossbow…?” she wrote. “I have no words to express my repugnance.”